Behind the train station, across the bridge, discover a controversial and constantly changing neighborhood which represent an excellent example to understand how Bologna is changing today. Bolognina was born between the end of the XIX and the beginning of the XX century as a working and industrial district. Although it is very close to the city centre, Bolognina is considered by the common feeling as a suburban area. An area enclosing the historical memory of the city: the birth of the local modern factories, the resistance against fascism during the second world war, the worker's struggle of the 1960-70's. And, last but not least, the Ustica Memorial Museum with its permanent installation reminding visitors about this tragic massacre. Bolognina district maintains deep roots with its past but it also open itself to the present, both in its most positive ( social and political sperimentation, solidarity, multiculturalism, hospitality) and negative ( gentrification, urban speculation) aspects. During the walking tour we will go tiptoe into the heart of the neighborhood, we will listen to stories, anedocts, tales of past and present times and we will build an ideal map of the places that make Bolognina so special.

Matteotti bridge: meeting point
Entrance door to the district for those coming from the city center and starting point of the tour. The square near the bridge is dominated by the Bologna Shoah Memorial, a monument born by the joint commitment of the Jewish Community in 2016.
Piazza dell'Unità
The heart of the neighborhood, with its basketball court in the center of this oval square. Here a plaque recalls the famous battle of the Bolognina, one of the key episodes of the Bolognese Resistance against Nazi-Fascism.
Officine Minganti
A former factory transformed today in a shopping mall, Officine Minganti represented one of the most important industrial realities of Bologna, connected with the urban development of the district and theatre of important workers’ struggles.
Zucca park
The name “Zucca” derives from an 18th century village that once stood in the immediate vicinity. The park includes the 19th century Tram society building with the buildings of the stables and sheds, partly occupied by the Museum for the Memory of Ustica.
Ustica Memorial Museum
The Museum, created by the french artist Christian Boltanski on behalf of the Association of the Victims’ Parents, recalls the tragic massacre of Ustica with an evocative installation surrounding the remains of the plane shot down in 1980.
Street art: Frontier project
An important project dedicated to the writing and street art scene, realized by the Municipality in 2012. 13 walls for 13 world-renowned artists, some of whom worked in this area of the city (among them Eron and Daim).
Via Fioravanti
Fioravanti road is in continuous urban transformation, between building speculation and gentrification. Multi-storey car parks, huge hostels, new residential projects: here is where the neighborhood is experiencing the fastest process of urban change.
Via Albani market
The historic Bolognina market was born in 1934, a few years after the construction of the public housing. In 2015 a restoration project has completely renewed the market, thanks to the intervention of some well-known artists.
For schools and indviduals rates or customized quotations..
Contacts 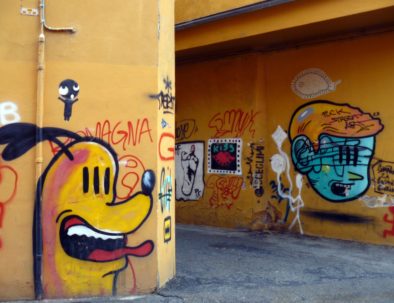 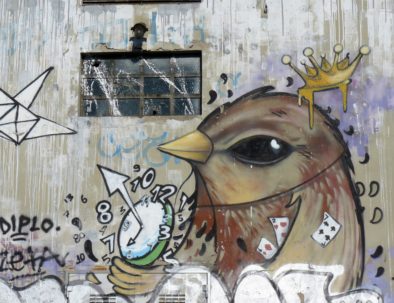 This 2-hour trip to the district of San Donato will give you a general idea of Writing and Street Art in Bologna, but it will also allow you to understand the history of the city and its evolution in the last years. 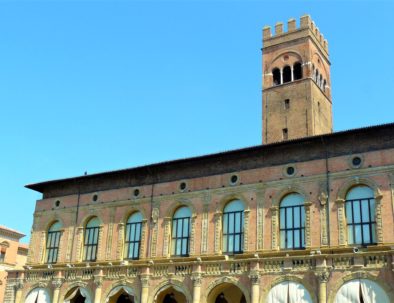 Small, cozy, ancient and modern, Bologna can be easily visited on foot. On this tour we walk under its porticos, exploring its monuments and turning the nose upwards to admire its medieval towers.
Comments are closed.